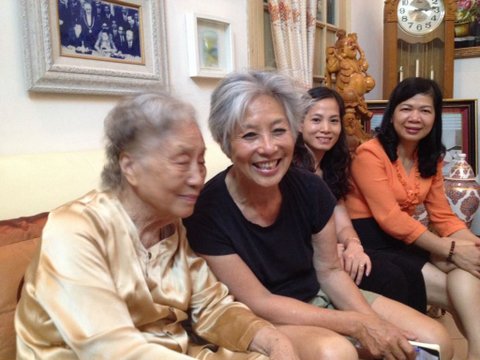 The Vision:  With guidance from OGI, coastal cities expand production of energy, water, and food beyond the limits of their shores using OMEGA systems that combine water-cooled solar for electricity and heat, processed wastewater for biofuels and potable water, ecological aquaculture for food and environmental restoration.  These enhanced resources and services support sustainable circular economies and prepare future generations for rising sea levels.
What does an OMEGA System look like, and how does it work? 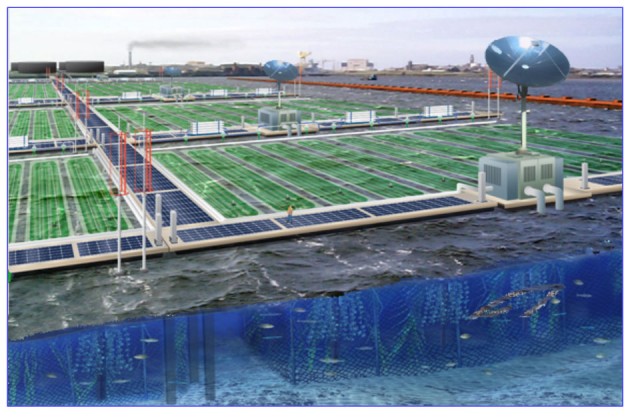 Artist’s rendition of the OMEGA system in a protected bay

OMEGA offshore systems synergistically combine new and emerging energy, wastewater, and aquaculture into an ecology of technologies. Powered with high-efficiency water-cooled solar panels, the system produces clean water, biofuel, and fertilizer from wastewater and CO2 circulating through a network of clear, flexible plastic tubes, filled with fast-growing microalgae.  In addition to providing biomass for biofuels and capturing CO2 that would otherwise go into the atmosphere as a greenhouse gas, the algae are the first step in a process that combines forward and reverse osmosis to transform wastewater into drinking water—and it’s cheaper than desalination. Solar also powers OMEGA open and closed aquaculture systems to produce food and improve the coastal environment. Converting wastes into resources and creating islands of productivity, OMEGA expands and invigorates coastal cities with sustainable circular economies.

Now, after four years of experimentation and $10.8M of research support from NASA and the California Energy Commission, the integrated OMEGA system is ready to launch and an international team of scientists, engineers, entrepreneurs, and students formed the OMEGA Global Initiative (OGI) to help bring OMEGA to a bay or inlet near you.

How is an OMEGA system implemented?

The OGI team partners with local experts to develop OMEGA platforms using a protocol that mitigates risk and ensures success.  This involves four phases, each with two steps.   The Evaluation Phase begins with a Discovery Step in which OGI experts evaluate sites for their physical and social OMEGA compatibility. Physical compatibility means the right marine conditions, weather patterns, logistics for moving wastewater and obtaining carbon dioxide, solar radiation, and the practicality of solar and aquaculture facilities.  Social compatibility means identifying local experts, stakeholders, funding sources, and decision makers in universities, corporations, communities, and government agencies.  With this knowledge and network, the evaluation phase continues with a detailed Analysis Step that includes site visits, discussions, presentations, meetings, corporate and environmental assessments, culminating in a comprehensive report with a go or no-go conclusion.

With a “go” evaluation, OGI enters the Socialization Phase in which a virtual OMEGA system is created and evaluated, and then discussed in a workshop. The Simulation Step creates 3D animations to visualize the system as it would appear in the selected bay and creates data-driven environmental and econometric models to predict the system’s potential impact both on the bay and the community.  The Workshop Step informs and engages locals with discussions of the significance of OMEGA for their community, its environmental and aesthetic appeal as well as its economic impact. Also during the workshop the local OMEGA team is identified and screened to determine if the project will enter the Implementation Phase.

Implementation begins with a Teaming Step in which local leaders, companies, and resources are are recruited to the OMEGA project.  This local team with help from OGI develops site and project requirement documents, identifies subcontractors, applies for permits, and secures grants or other funds.  At this point the project moves into the Demo-Install Step to install a system of up to 0.5 hectares in preparation for the Operation Phase.  Using the demonstration system the Appraisal Step operates, evaluates, and adapts all components to trouble-shoot and provides real data for the econometric model.  Only with a reasonably complete data set for all key parameters will the system be ready for scale-up in the final Commercial Step.  Four phases and eight steps to OMEGA and a sustainable future for coastal cities worldwide.

The OMEGA Global Initiative recently initiated it plan for the first pilot project, in World Heritage Site Ha Long Bay.   A spectacular tourist attraction, rapidly growing Ha Long Bay is in the midst of Vietnam’s main coal mining district, pitting the environmental problems created from burning and processing coal and industries such as cement production against the need to protect the environment.  The OMEGA Global Initiative will help fill this OMIneed by capturing the CO2 created by coal fired power plants and cement plants and combining it with the growing amounts of sewage which now pollutes the Bay to produce algae products, clean water and increased aquaculture.  A report on the Ha Long Bay project can be found here.

For more information on OMEGA and OGI:

Watch VIDEOS about the OMEGA project.

Find out about OGI ADVISORS, AMBASSADORS, and STUDENTS.

How YOU can get involve:

help us with your knowledge, your time, your network, or your donations.