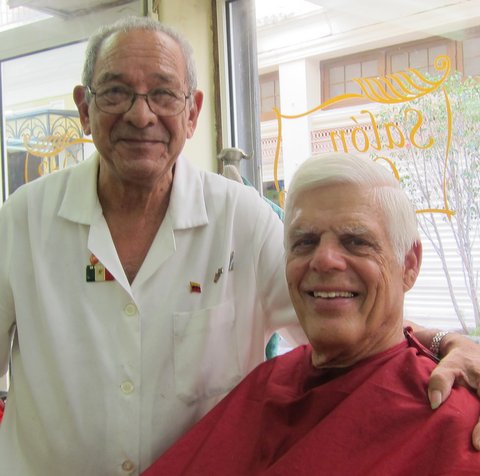 Tom Miller with his barber in Havana

Recently featured with his wife Tran T. Nhu in the New York Times Tom Miller is a senior partner in the law firm of Miller Washington & Kim, providing a broad array of legal services to corporations and individuals (www.millerwashington.com).   Mr. Miller holds a B.A. from Yale (1960), an L.L.B. from Stanford Law School (1965), where he founded its International Law Society, and a Certificate in Foreign and Comparative Law from Columbia University.  Mr. Miller’s experience with the non-profit world is highly distinguished.  Prior to 1965, as a UC Berkeley faculty member and secondary school teacher in West Africa, Mr. Miller helped establish the Peace Corps and its first program, in Ghana – after working on railway gangs in Canada for Frontier College, the predecessor of the Peace Corps.
In 1966, he set up in Viet Nam what was at the time the largest reconstructive surgery hospital in the world to treat war injured children.  After the 1973 peace agreement he was a consultant to UNICEF for a $100 million aid program for the children of Vietnam, Laos and Cambodia.  Mr. Miller is pro bono General Counsel to Global Exchange, a people-to-people human rights organization; and is Board Chair of The Nautilus Institute for Security and Sustainable Development (www.nautilus.org), a Macarthur Award winning organization specializing in global problem solving techniques.  In the early ’70’s he was named, along with then youthful Senator Joe Biden, as an “Outstanding Young Man of the Year” by the United States Jaycees, and in 2008 he and Tran Tuong Nhu received the Global Citizen Award from the Bay Area United Nations Association.  His sponsored political cartoons, posters and billboards have received wide publicity and he is a frequent contributor to the letters section of the New York Times and San Francisco Chronicle.

More recently, he helped establish Parwaz, the first Afghan-run microfinance project and the Vietnam Green Building Council. He is currently working with the Cuba’s Antonio Nunez Jimenez Foundation toward a sustainable future in that country through permaculture, alternative energy and local, organic food production; as well as with Vietnamese algae experts and NASA scientist Jonathan Trent, whose OMEGA project converts sewage waste into biofuel at sea. North Korea algae experts have expressed an interest in this area, and Green Cities Fund has initiated a dialogue between Vietnam, North Korea and Nautilus Institute algae and alternative energy experts.