Artist/attorney Osha Neumann has fought for generations for the preservation of Berkeley’s People’s Park as a symbol of the never ending fight against injustice. He has also worked to preserve the adjacent People’s Park Mural which is badly in need of restoration. Tax deductible contributions toward the mural restoration can be made through its fiscal sponsor, Green Cities Fund. GCF will pass on 100% of all funds received to the mural project.

(to avoid giving 3% of your donation to PayPal, mail us a check)

Read more about the project below…

People’s Park has always existed under threat of the University of California. When Osha was asked to consider designing an appropriate memorial, should this happen, he responded, rightfully, he did not want to be an accomplice to its destruction, as follows:

“A memorial honors what is lost and preserves memory. That is what a sculptural plaque could do in this case. But here’s the problem for me: Those who are planning to turn People’s Park into a memory, to destroy it, plan the memorial at the same time as they plan the destruction. Art, therefore, is asked to be an accomplice of sorts. Art and the elimination of what it memorializes are a package. The planning for the memorial makes the planning for the destruction more palatable. Art is mobilized to facilitate the loss of something people value and have struggled for, which it is then asked to preserve in the realm of the imagination. It is therefore placed in a kind of uneasy alliance, or at least an alliance that makes me uneasy (and I say this, putting aside my opinion on the merits of the proposal to build on the park, and without denying that destruction can also be a prelude to creation). Art can honor resistance to loss, the struggle against it. But the sculptural plaque that is being proposed could not be part of resistance, and could only memorialize resistance by a kind of bad faith. All this makes me uncomfortable and that discomfort would undermine any effort I could make to create the memorial you are planning.”

Instead, Osha made a positive counter proposal:

In 1976 I designed and with community support completed a mural on the side of Amoeba records, whose official title is “A People’s History of Telegraph Avenue,” but which is popularly known as the “People’s Park Mural.” It has been declared a Berkeley landmark. For 42 years it has been the only public monument I know of in Berkeley to the movements that culminated in the creation of People’s Park. It depicts those movements, the building of the park, and then the battles that ensued when the University moved to fence it in. 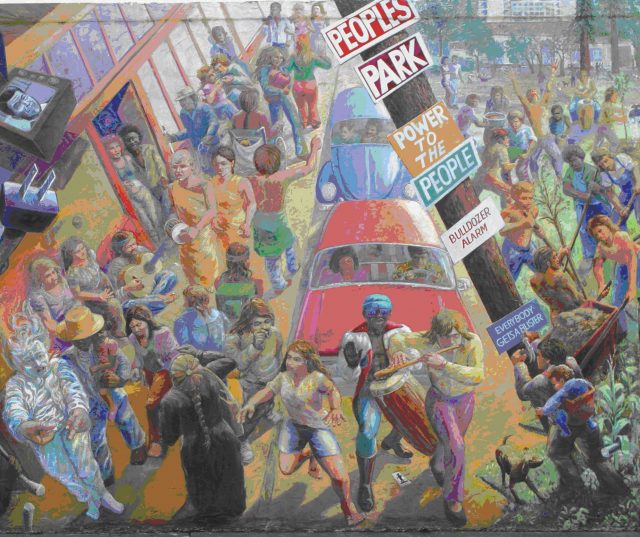 The mural has been protected by the community. It is remarkably free of graffiti, but age is taking its toll. In 1999 one of the original artists and I did a complete restoration, but now it is again badly in need of repair. We are trying to raise the funds to preserve and protect it. If we do not act now, it could be lost. If we do the work we are planning, it could be around for another 42 years at least.

(to avoid giving 3% of your donation to PayPal, mail us a check)